My text has no excuse. 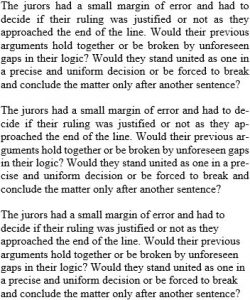 When I created my website I used full text justification, but as I read more on the subject I realized I might have been unintentionally arrogant. So, I changed my mind.

I’m one of the early adopters of ebook readers, buying my first ereader about a year after they were publicly available. The motivating force behind my switch was that I was simply running out of shelving space for all of the books I’d bought and collected. Reading electronically was odd at first, but after I’d worked my way through my first ebook it seemed normal. In fact, switching back to physical books now would be odd.

I mention my ereader because I read so much with it that I’m used to how it presents text. For the most part, ebooks use full text justification without hyphenation. Therefore, that’s what I’m most comfortable seeing. Which is why I realized I might have been arrogant. Just because that formatting looks better to me doesn’t mean it looks better to anybody else.

Briefly, I tried coding my website so the full text justification was as “optimal” as possible. This meant that browsers like Firefox would hyphenate to improve word spacing, and the latest IE would implement new “smart” spacing techniques. But it also meant my website would look different to different people—and there were larger issues.

There are psychological reasons against full text justification. Some people are distracted by the increased spacing between words that it requires—and the use of hyphenation to reduce this spacing can be even more of a nuisance to others than what it’s designed to address. Worse, some people simply feel “lost” when looking at a right-aligned margin in the first place; for them, a “jagged” right margin actually aids their reading ability.

While these may not be concerns with printed text, especially where better algorithms are used for word and letter spacing, or for ereaders that are designed specifically for people to read electronic-based text, it is a concern for people who use computer monitors, tablets, or mobile phones.

My website isn’t meant solely for my own edification. It should be accessible to as many people as possible. Therefore, my text has no excuse … it is no longer justified.